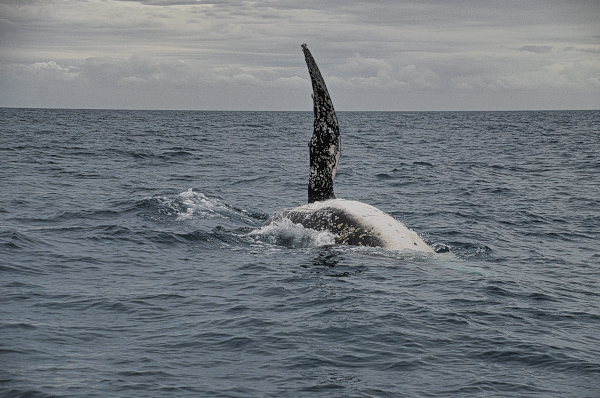 Hervey Bay has remained dear in our memory since our first trip to Queensland. It had been the starting point for our tour of Fraser Island*. We had also spontaneously decided to go and see Lady Eliott Island from here. And since whale season was just starting, and Hervey Bay is known for being a great place to watch whales, it was an easy decision for us to return for the third time and book a whale-watching tour*. After all, as the saying goes, good things come in threes!

Actually, we weren’t even sure if we would book a whale watching tour when we returned to Hervey Bay. After all, we had been very lucky while we were in New South Wales on our journey up to Queensland.

We stopped to have lunch at Hastings Point Lookout when something in the ocean caught our eye. There was something moving. It was a little further out, but as we looked closer, we could clearly see whales! The whales were playing and slapping their fins into the ocean which made a thundering clap. Looking across the horizon, we could see spouts everywhere!

It was an incredible spectacle, and we couldn’t get enough.

Later in the day, we also saw dolphins, about twenty at a time, who playfully surfed the waves. To be able to experience such an unplanned natural wonder was an absolute dream.

We liked it so much there that we decided to stay overnight.

The next morning, we opened the back door of our campervan and had the best view you could wish for. As the ocean sparked from the rising sun, and a few surfers were patiently waiting for the perfect wave, we could see another whale right in front of us! It was so close that we couldn’t believe it!

While our coffee was brewing fragrantly, we kept looking out and knew that we didn’t want to leave here just yet.

We spent the rest of the day like the day prior: just staring at the ocean and enjoying the wonders of the world.

The hours rushed by quickly as we sat in our camping chairs enjoying our time.

It reminded us of our amazing whale-watching tour in Kaikoura, New Zealand, which is also forever in our hearts.

Back to Hervey Bay

Our first point of contact was the Hervey Bay Information Center. We were eager to see if we could still stay in our campervan free of charge here again. And we wanted to figure out how much a whale tour would cost.

We got our info, and the parking lot was also quite empty, so we decided to just come by later in the evening to stay the night.

Because I hadn’t been to the beach for so long, James drove me to the ocean, and we took a nice, long beach walk. At sunset, we sat on the steps and I had a video chat with my mom, who loves sunsets as much as I do.

Afterward, we went back to the information center and talked about whether or not we should really do a whale-watching tour.

While James looked at the different tours, I made a rough outline of where we had to be and how long we had to putter around. We had accepted a short house sit in Bowen in the next few days. This reduced our free time a little, but since we had seen almost everything that we wanted to see on our first visit to Queensland, the timing was perfect for a house sit. In addition, Bowen Golf Club, where we wanted to play, was only three minutes away from our house sit.

I could see on James’s face that he really wanted to do the whale watching tour.  Even if a small panic attack was building up inside of me because of my seasickness, I said that we should call and book a tour. It was already almost 8 p.m. and we had little hope that someone would pick up. But a charming lady answered the phone and quickly booked us in. It was uncomplicated, and we had two spots for the tour the next day. There was no going back for me! But seeing James’ beaming face, and, of course, seeing whales would be worth it.

The next morning, we drove to the marina and arrived at the pier for the Freedom III, our tour ship.

We were warmly greeted by Sue, who had helped us by phone the night before. AND: She had looked at our website and knew that we were traveling the world with our golf clubs. We had nice a little chat as we happily checked in.

Unfortunately, the news which I did not want to hear, came: the weather was about to change! Rain and strong northeast winds were predicted. That meant that half to one meter high waves were expected. But the good thing was that whales had already been spotted. I took a seasickness tablet,  and already cursed the idea of going on a ship. Why did I do this over and over again?! At some point you learn, don’t you?

An announcement from Captain Keith came. I didn’t understand everything, but he seemed to be a funny guy. The beauty of sailors is that they all have a special sense of humor that I really like. But his: “I wouldn’t call the sea rough-rough…” made me a little scared.

While firing up the engine, his next joke did not arouse a laugh in me, but rather a panic. “If you want to get out, you should do it now!” he said with a smile in his voice.

Remembering back to our time in our lockdown in Jervis Bay, where we had sometimes meditated a bit. I was practicing exactly this at this moment. I pictured whales protruding from the sea in my mind. That would be worth it. Absolutely. Stay cool, look out at the horizon, and everything will be all right!

As I stared at the horizon, I heard over the loudspeaker that Fraser Island was originally called K’gari, which translates to “paradise.” We passed Big Woody Island and Little Woody Island, which were once used as quarantine islands.

I was reasonably able to admire the islands. The tablet seemed to work, so I could even say yes to the homemade scones with strawberry jam and cream. Our plates included another specialty: Captain Keith himself had made his famous chocolate profiteroles for the tour, and they tasted fantastic!

At about 9:30 the engines started, and by 11:00 a.m. we already saw our first Humpback whale!  And one of them was directly right in front of the ship!!

Everything felt like it was in slow motion. In the distance, we saw another whale that was obviously having fun jumping out of the water. Again and again, he slapped his fin into the sea, and we wished he would come closer

The curious whale, which had now swum closer to the boat, did not jump but did what Captain Keith referred to as “Spyhopping”. A spy hop is when a whale raises their head vertically out of the water.

He then swam sideways, and we could see his flipper a few times!

As the boat bobbed up and down, I tried to take photos with one hand while desperately clinging to the rail with the other. Apart from us, there were no other boats as far as the eye could see, and we had the whale all for ourselves! And he was so close that we could hear him.

A Whale of a Day

We drove on and saw so many whales that Captain Keith couldn’t decide in which direction to go next. Even a mother with her calf swam to us. While I was enjoying these fascinating animals, the rocking of the boat unfortunately was taking its toll on others. Their nausea was visibly written on their faces, and I was so glad that I had taken the tablet at the beginning of the trip and had concentrated so intently on the horizon. Time passed so quickly, and James and I were overjoyed. We hadn’t just seen whales! We witnessed how they played in the water, slapping their flippers loudly, and looking out with their heads. It seemed almost as if they were curious to see who was on the boat!

And as if all of this wasn’t enough, the highlight of our day was about to come! A Humpback whale read my mind. He approached the boat and suddenly leaped out of the water! To say that I had goosebumps would be a massive understatement. It is exactly for experiences like this, that we travel! We will never forget this moment!

The Day Comes to an End

Lunch was served on the Freedom III and they even provided us with a vegetarian plate.

I was still trying to look at the horizon as much as possible because the weather hadn’t gotten any better. On the contrary, it had gotten worse. It started raining so hard that the Captain decided to drive towards the harbor after lunch. Some guests were feeling worse and worse. I’m sure Captain Keith’s decision sparked the brightest joy in them.

We will always remember our whale watching tour in Hervey Bay. Watching this spectacle up close was and is an absolute highlight of our trip that we will never forget!

The links marked with * are affiliate links. If a purchase is made via a link, we will receive a commission. There are no additional costs for you. Where, when, and how you buy a product is of course up to you.

Best Things to do in Hobart

Home away from home

We use cookies to ensure that we give you the best experience on our website. If you continue to use this site we will assume that you are happy with it.Ok