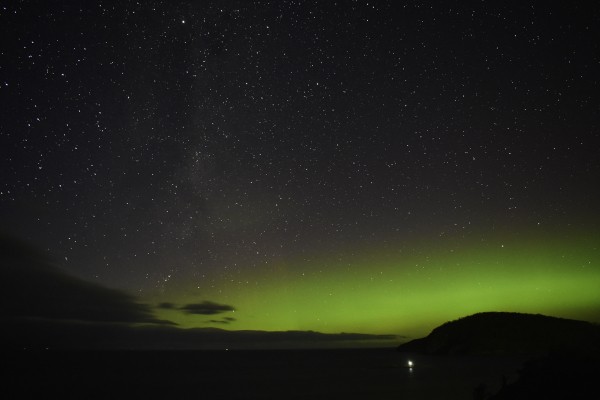 The Southern Lights and the Milky Way

Having always lived in the northern hemisphere, seeing the Southern Lights, or the Aurora Australis as they are also known, seemed only possible in our dreams. But sometimes, dreams do come true!

During our 4-month journey through Tasmania, we knew that this might be one of the best chances in our lives, to see the Southern Lights. If not our only chance! Even though it was summer, we had heard of fellow travelers seeing them. So, we started looking more seriously into finding the best spots in Tassie to view the lights.

One evening the predictability forecast was high, so we met our friends near The Nut. It was a cold cloudless evening, and we had a clear view of the southern skies- all perfect recipes to see the Auroras. Just then, a beautiful, but blinding full moon rose on the horizon, dashing our hopes.

During our last few weeks on the island, we were still hopeful to be able to see the lights. While we were just outside of Hobart, we received a note from our friends telling us that there was another alert on for the evening. We were planning to drive to Mt Field to spend a few days but quickly changed our minds.

A Night We Will Never Forget

After a Google search of the best places on Tassie to see the Southern Lights, we were off to South Arm! It was still early when we pulled into the car park at Goat Bluff Lookout, and we staked out our spot. The lookout had a nice long wooden platform, and more importantly, unobstructed views of the southern skies. The sun set, the skies darkened, and it quickly got cold.

As the evening deepened, and the skies remained clear, our hopes began to soar! The Milky Way was high above us, and we wondered if we were in for something special when suddenly, we were surrounded by photographers, many with professional cameras.

Shortly before 9 pm, we heard someone excitedly shout, “I got it”! After a 30-second exposure time, we couldn’t believe our eyes- we had our very first photo of the Aurora Australis!

By 9:15 pm we were seeing the Southern Lights with our naked eye! Yellows, golds, violets, and greens were glowing across the entire southern sky. And what looked like stripes reaching up towards the heavens! With beams slowly dancing around, we were witnessing something that we had been hoping to see for such a long time, but never really believed would happen. In between photos, we couldn’t help but look at each other with huge smiles, knowing that tonight was a night that we would never forget!

What are the Southern Lights

Often referred to as the Aurora Australis, or the Southern Polar Lights, the Southern Lights are similar to the Northern Lights, the Aurora Borealis. Both aurorae are brilliant displays of green, yellow, and violet colors that happen when the sun releases a massive burst of solar wind and magnetic fields into space. The solar winds carry particles that interact with the earth’s magnetic field, which then collide to produce energy releases in the form of auroras.

While it does focus primarily on the Aurora Borealis, the University of Alaska Fairbanks’ Geophysical Institute website is a tremendous resource in all facts related to Aurora.

Unlike the Northern Lights in the north, it is actually possible to see the Southern Lights year-round. However, the winter months of May to August are the most common months to see the Aurora Australis. That said, we saw them at the end of March 2021 (March 20th and again on the 21st), which is early fall in the southern hemisphere.

The time of year, however, is not the only factor in your chance to see the Aurora. Something called Kp-index is very important. The Aurora Forecast website defines Kp-index as “the disturbance of the Earth’s magnetic field caused by the solar wind.  The faster the solar wind blows, the greater the turbulence.” And the higher the Kp-index, the better odds of seeing the Aurora.

Unlike the Northern Lights, there aren’t as many websites dedicated to forecasting the Southern Lights. While traveling around Tassie, we watched the Aurora Australis Tasmania Facebook group. This is a wonderfully helpful group, full of enthusiastic members who send out alerts any time the probability of seeing the Aurora is high. Early February was our first-time reading messages of strong warnings.

The moon, cloud cover, and city lights all contribute to your odds of seeing the Southern Lights. Clear, dark nights are essential, which is why during the winter months the chances of seeing the Aurora are higher.

Best Places to see the Southern Lights in Tasmania

We saw the Southern Lights at South Arm, Goat Bluff Lookout to be exact, but there are many great places in Tassie to see the Southern Lights. The most important criteria are a location that has an unobstructed view of the horizon due south. Some of the most popular locations offer some elevation, Mount Wellington and Mount Nelson for example. But other popular spots are the incredible Cockle Creek, the southernmost point in Tasmania, and Eaglehawk Neck which is found on the Tasman Peninsula. Some mates of ours took some amazing photos of the auroras on the Peninsula.

Our first-time hearing that a solar cycle was forecasted, we were in the Hobart area, so we drove down south of Blackmans Bay. We found a great south-facing spot, but the clouds rolled in as the sun went down. We tried again while we were in Stanley, which is located on the north coast. Parking at the south-facing Highfield Lookout and had a wonderful view of The Nut and the southern skies. The location was promising, but the rising full moon spoilt any chances we had.

We read that the Aurora Australis are sometimes visible across southern Australia, especially in Victoria. It is also possible to see the Aurora in New Zealand, especially on the South Island, as well as in southern Chile and Argentina. And with a considerable amount of effort and money, Antarctica would be an epic spot to see the Southern Lights!

How to Photograph the Southern Lights

Getting a good photo of the Southern Lights is just about as difficult as seeing them! And of course, getting the settings correct for your shot is going to depend on a lot of factors, including how strong and active the Aurorae are. Nevertheless, with some online research, we were able to find the most likely correct settings for our camera before we saw them.

ISO: we have a Nikon 3500, which is on the entry-level end of DSLR cameras. We found that we got the best results setting our ISO at 1600. Our camera goes up to 3200, but it didn’t give as good of photos as the lower setting.

Aperture: we changed our aperture between f/3.5 and f/4 but received our best photos with f/3.5. Some cameras may be able to go even lower.

Shutter Speed: we set ours to the longest exposure time possible, which is 30 seconds.

We also travel with a small Canon G7X that we used to photograph the Auroras. We set the Canon to ISO 1600, f/2.8, and 25 seconds of shutter speed, and also got really great results. The stars above the Aurora aren’t as clear as the Nikon, but for a compact camera, we were very happy.

Tip: Set the timer function on your camera to 2 or more seconds when using a tripod, especially when using longer shutter speeds. This will help reduce camera shake.

We watched the Auroras for well over an hour before the brightness of the moon made them no longer visible to the naked eye. While we were there, there were many of what we would call professional photographers. Some were somewhat protective of their camera settings. However, we stood next to a great local mate that offered to assist us with our settings. And we must say, the photos that he was taking were absolutely stunning! And, with the Milky Way right above us, some of the photos that he took of both the Aurora and the Milky Way were simply out of this world! In the excitement of the moment, we regret not exchanging contact information with him so that we could have seen his photos other than on his camera screen!

When you go out to hunt the Auroras, be sure to dress warmly. Even though it was summer when we saw them, it got very cold. We had on our jackets, hats, and gloves. In the winter, and especially at the latitudes, keeping warm is imperative. As is patience!

We have really come to appreciate every moment of our journey. And are in constant awe of the wonders we have seen. We never expected to see the Southern Lights and consider ourselves extremely fortunate to have had the opportunity. And now that we have seen the, we really want to see the Northern Lights!

We are also extremely curious to know if and where you have seen the Southern Lights!

Best Things to Do on the Bellarine Peninsula

The Old Town of Ipoh, Malaysia